Scruffy dragged home a Beluga whale from his visit to Marineland today. It sure tired him out. What a trooper. 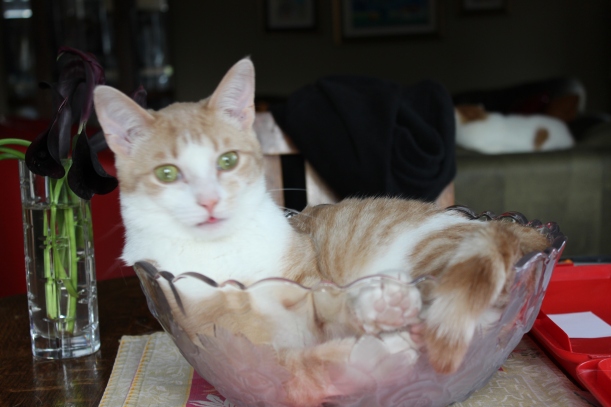 While Maya and I had breakfast this morning, we were interrupted by the screaming of an animal in agony.  Leaping up and racing out to the back patio, we saw Riley with a baby bunny in his mouth.  To be specific, Riley had the poor lapine by the nuts.  It was dangling head down from his jaws with both back legs sticking up on either side of his head screaming like the damned.  I was so proud of Maya, she didn’t freak out or go crazy.  She just stared at natural selection going on 3 feet in front of her.  On the other hand, I lurched out the door in my underwear to chase the freakin’ cat and save poor Thumper.  Riley immediately realized that his triumph was about to be taken from him.  He bolted.  I directed Maya to circle around and cut off his escape route.  She bravely assisted in cornering the carnivorous cat and I was able to grab him and begin applying the jaws of life to his teeth.  I was relieved to see poor little Thumper race from the yard, under the fence and as far as I can figure, over the US border.  It was only then that Maya started to cry.  “Don’t worry, love.”  I said. “You were a hero.  We saved that bunny’s life.”

Later on the way to work, I thought, “Shit, I should have taken a picture first.”  But then I realized what an asshole that would make me and was pleased that I had no photo to offer on this post.

Scruffy instructs, “Ginger, pay attention.  It is all in the tongue and the balancing leg.  You need to focus.”

Ginger notes, “Wow, there’s so much to remember.  I’m just a little cat, you know.”

Ginger queries, “Let me see if I get this… so Scruffy is the jail guard and you, Belinda, are the sultry prisoner. What’s sultry mean, again? Anyways, I don’t understand what you did that was bad…”
Scruffy mutters, “Just go away… PLEASE!”

Belinda says, “You know… this new covered patio seems like a good idea on a day like this. I like the comfy new furniture too.”
Carla says, “You talk too much.” 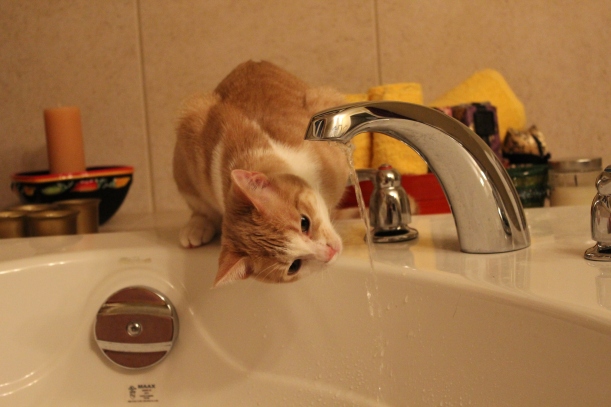 Ginger ponders, “Ok. I see the water, hear the water and just touched the water… how do I taste it? Damn! This is trickier than it looks.”